Published: Sep 30, 2020 · Modified: Apr 11, 2022 by Samantha · This post may contain affiliate links (I may earn a small commission if you shop through my link, at no additional cost to you). 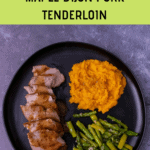 Pork tenderloin with maple mustard sauce is an easy pork tenderloin recipe perfect for two or three people. Use a cast iron skillet to sear the pork on the stove and finish it in the oven for a juicy and tender result. Top with a flavorful sauce and pair with your favorite seasonal produce for an impressive dinner.

What do you serve with this pork tenderloin? Pork tenderloin is really versatile and goes with a variety of vegetables and sides. One of my favorites is pressure cooker mashed butternut squash.

How do you store leftover pork tenderloin? Store cooked pork tenderloin either with or without the sauce in an airtight container in the fridge for up to three days.  Often, I’ll store it with whatever vegetable sides I made and just heat it all up together.

How do you reheat pork tenderloin? To reheat pork, I just microwave it until warmed through. Because it is originally cooked to 145 F, it remains juicy and flavorful even after being heated up.

If you don’t want to use the microwave, you can heat up pork in the oven at 350 F for 10-15 minutes until warmed through.

What can you use leftover sauce on? It is likely you’ll have leftover sauce from this recipe. You can use this up on other proteins like chicken breasts or thighs, turkey or even use it as a sauce for wings!

Another option is to freeze it for the next time you make pork tenderloin. If you're adding it to another protein, make sure to add it after the protein is fully cooked to avoid burning.

What color is cooked pork tenderloin?  Pork tenderloin cooked at 145 F internally is slightly pink in the middle and that is perfectly safe to eat.

See recipe card below for quantities.

The different grades and colors tell you what flavors you’re getting. I enjoy Grade A maple syrup for a rich and full flavor.

Are pork tenderloin and pork loin the same thing? They are different cuts on the same animal. They are not interchangeable pieces of meat.

Pork tenderloin is a cut that is very tender, lean and usually about one and a quarter pounds, making it perfect for two or three people. However, a pork loin is much thicker and can vary in size and fat content

What type of dijon mustard do you use for the sauce? I use whole grain dijon mustard in this recipe for the texture as well as the flavor. If you can’t find or don’t have this type of mustard you can substitute smooth dijon mustard, but it will change the texture a bit. The flavor should be just as delicious.

How do you prepare pork tenderloin? To prep pork tenderloin start by removing the silverskin. Silverskin is thin connective tissue on pork tenderloin and is literally silver. It doesn’t ever cook down or out, so it’s best to remove it for texture.

Discard the silverskin once removed, it goes about half way down the tenderloin. After that, remove any large pieces of fat and you’re ready to cook!

How do you make maple dijon pork tenderloin?

While the pork tenderloin is resting, melt butter in a medium saucepan until slightly foaming over medium heat. Stir in maple syrup, mustard and soy sauce until combined. Allow the sauce to come to a simmer.

Mix water and cornstarch to form a slurry and then stir directly into sauce. Cook for one to two minutes until thickened and then remove from the heat. Add to the sliced pork and enjoy.

How do you know when pork tenderloin is done cooking? The best way to tell when any protein is done, is with a meat thermometer (affiliate link) to take the internal temperature. Pork tenderloin is done at 145 F, when it is slightly pink in the middle. You can cook it longer to a higher internal temperature but you run the risk of it being dried out since it is such a lean cut of meat.

If you don’t have a meat thermometer, cook the pork tenderloin for 8 minutes in the oven (after searing!) and cut it open to check the doneness. You will lose some juice from this method but it will tell you if it’s done.

When do you add the maple syrup and mustard sauce? To avoid burning, add the sauce after the pork tenderloin has finished cooking and been sliced to serve. Slicing the pork tenderloin gives you more surface area for sauce and makes each bite extra flavorful.

If you substitute another cut of pork, your cooking time will drastically vary from the listed times. It will be delicious, but the times are not interchangeable.

Pork tenderloin is a very versatile cut of meat. My basic recipe is to season well, sear and finish baking in the oven. Try another flavor profile to make it feel like a whole new recipe

Make sure the pork tenderloin sizzles when you place it in the pan to sear. If it doesn’t sizzle, remove and continue to preheat your skillet. This will give you better color and flavor. 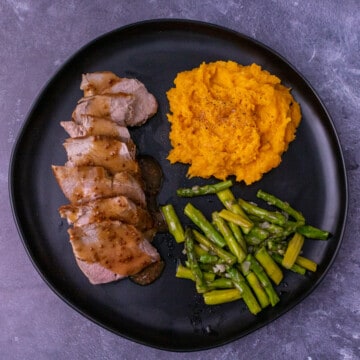 Tried this recipe? Want More?Subscribe to the newsletter for more flavor!

This recipe was originally posted on September 30, 2020. It was updated to be clearer with more information and better instructions on April 11, 2022.

235 shares
Get the Brunch Pro Theme