Published: Jul 6, 2021 · Modified: Aug 29, 2022 by Samantha · This post may contain affiliate links (I may earn a small commission if you shop through my link, at no additional cost to you).

Cast Iron Apple Crisp is the recipe you should make after you go apple picking. Make this classic fall dessert with a oatmeal topping and melted butter to make your house smell like fall. Caramelized apples, warm spices and a crispy flavorful topping makes this a hit at parties and throughout the fall. Serve with vanilla ice cream or whipped cream to make it extra special.

What do you serve with apple crisp? I like to eat apple crisp as a dessert in the fall after going apple picking or for Thanksgiving dessert. It’s a classic comforting fall dessert using seasonal fruit. I like to serve it with a bit of vanilla ice cream or whipped cream and hot coffee or tea.

How long is apple crisp good for? Apple crisp is good in the fridge for about four days.

How do you reheat apple crisp? If your apple crisp is still in the cast iron skillet, reheat at 350F until warmed through. If you’re just warming up a small portion you can microwave it until warmed up in a bowl.

Can you make this ahead of time? Yes, this is a great make ahead dessert that can be eaten at room temperature. It’s a great Thanksgiving dessert to make because you can easily make this a day or two before the main event.

Another option is to prepare the crisp with the apples and crisp unbaked and store in the fridge. Pull it from the fridge and place in a preheated oven and cook for 40 minutes.

It may take a little longer to cook from a cold fridge and cold pan, but this is a great option while eating Thanksgiving dinner. Plus it’ll make your house smell wonderful and make everyone hungry for dessert.

Does this travel well? Yes, I love bringing this to fall birthday parties or other events. It’s also a great make ahead fall dessert for Thanksgiving. It’s a family favorite and a classic comfort food that is a big crowd pleaser.

What apples should you use? I typically use any combo of the following: cortland, empire, honey crisp, braeburn, mutsu, pink lady and granny smith apples. These are all good baking and eating apples and have a variety of textures and flavors.

I recommend not using all of one type of apple to get a deeper flavor and the best texture. Some types of apples, like red delicious, will break down very quickly and become mushy.  I’d avoid them if possible for this application.

What types of oats do you use for apple crisp? I use old fashioned oats or rolled oats. Avoid instant cooking oats or quick oats because they will break down while baking. It is best to avoid steel cut oats as well because they will not have a great texture.

What are the best toppings for apple crisp? My favorite toppings are a really good vanilla ice cream or homemade whipped cream. If you’ve feeling low energy after apple picking, the stuff from the can or Cool Whip from the freezer works just as well. Another great option is to top it with some extra cinnamon and toasted pecans or walnuts.

How do you make cast iron apple crisp? Preheat the oven to 350F. Place cut up, peeled and cored apple slices in a large mixing bowl and set aside. Preheat a 10 inch cast iron skillet over medium low heat and melt the butter for the filling.

Once the butter is melted, add brown sugar, cinnamon and salt by whisking it in. Pour the butter mixture into the mixing bowl that has the apples and toss until the apples are well coated.

Add the apples and butter mixture back into the skillet and turn the heat up to medium.  Stir occasionally while it cooks for five minutes, until the apples begin to soften. Remove the pan from the heat, but keep the apple mixture in it.

After the apples are partially cooked, cut the five tablespoons of butter into five separate pieces. In a medium mixing bowl, add all the toppings EXCEPT the ground cinnamon.

Combine ingredients using either your hands or a pastry cutter. It is okay to have small lumps of butter throughout the mixture. Top the apples in the skillet with the topping evenly and sprinkle on the cinnamon.

Place in the oven and cook for 35-40 minutes, until the apples are tender, slightly bubbling and the topping is crunchy. Remove from the oven and let it rest. Allow the crisp to cool for about 30 minutes before serving with ice cream or whipped cream.

Do you need to let this rest after pulling it from the oven? I recommend letting the dessert rest for about 30 minutes before trying to eat it. Before that it'll be molten lava that will absolutely burn your tongue. After about 30 minutes it should still be warm and easier to serve.

Is six apples enough? This really depends on the size of your apples. Whenever I make it, I use medium apples and six is plenty. However, I’ve had readers say it wasn’t enough apples and added a few more.

I make sure that the apples don’t overflow the pan but they do cover the bottom. The apples will cook down a bit. When you are cooking the apples on the stove top, you will be able to tell if you have enough apples.

Can you bake in a pan instead of a cast iron skillet? Yes! I recommend using a 9x9 metal pan as an alternative. Realistically any oven safe pan will work that’s a similar size.

An 8x8 pan would work just as well but the crisp may be a little bit thicker and may take a little longer to cook. If you don’t have any of those options, you can grab a cheap disposable pan at the grocery store and it’ll work just as well.

What’s the best way to cut up apples? I use an old style apple peeler (affiliate link) that peels, cuts and cores the apples all at once. This isn’t necessary but in the fall I make A LOT of apple crisp and this helps me a lot.

It is a once a year tool though. If you want to do it by hand, peel the apples and then cut around the core. Next slice those pieces into your desired size. I’ve found a simple how to peel and slice an apple video if you’re a visual learner.

Mix your the melted butter and brown sugar with the apples in a large mixing bowl. Doing it in the pan usually results in a big mess! 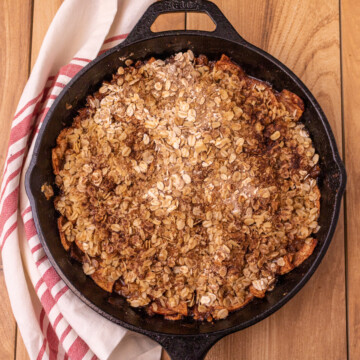 This easy apple crisp is made in the cast iron skillet with oatmeal as the topper. This is a perfect fall dessert to use up extra apples. Cast Iron Apple Crisp is a simple yet delicious old fashioned dessert. Perfect topped with ice cream or whipped cream for a crowd.
Print Pin SaveSaved!
Prep Time: 10 minutes
Cook Time: 40 minutes
Resting Time: 30 minutes
Total Time: 1 hour 20 minutes
Servings: 6 Servings
Author: Samantha