Published: Mar 10, 2022 by Samantha · This post may contain affiliate links (I may earn a small commission if you shop through my link, at no additional cost to you). 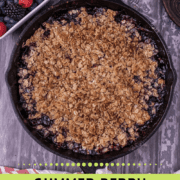 Cast iron berry crisp is a great make ahead summer dessert that uses fresh summer berries or frozen berries in the off season. With a buttery crispy oatmeal topping and sweet berry filling, it’ll be a hit with your loved ones or at your next gathering. Serve with whipped cream or vanilla ice cream for an added treat.

How do you store berry crisp? The best way to store berry crisp is by removing it from the cast iron and placing it in an airtight container in the fridge for up to four days. You can eat it cold or warmed up. Store separately from ice cream or whipped cream to avoid the topping getting soggy.

What do you serve with berry crisp? Serve berry crisp at room temperature (or slightly warmed up!) plain, with homemade whipped cream, or vanilla ice cream. I like to serve it as dessert but I’ve also been known to eat it for breakfast the next day (fruit+oatmeal = breakfast right?)

What’s the difference between a crisp, a crumble, a cobbler or a buckle? These desserts are all similar. Baked fruit desserts on the bottom with different variances in the topping. Part of the difference can be regional.

A cobbler has more of a biscuit type topping, a crisp has an oat topping, a crumble has a similar topping to a crisp but without oats, and a buckle is more of a cake with a streusel topping. Confused yet?

Signup for a biweekly e-mail with a tip, highlighted recipe, and grocery finds and plenty of flavor.

How do you make berry crisp in a cast iron skillet? Preheat the oven to 350F. To make the filling; mix all the berries, flour, sugar, cinnamon, salt and lemon juice in a medium mixing bowl until well combined.

Some of the berries may get crushed but that’s okay. Taste the filling to make sure it’s sweet enough. Add the filling to a 10 inch cast iron skillet (affiliate link).

Add topping to the berries, spreading it out evenly. Sprinkle cinnamon over the topping and place in the oven.

Cook for 35-40 minutes, until berries are bubbling and the topping is crunchy. Allow to cool to almost room temperature (1-2 hours) or until berry filling is set.

Serve at room temperature, slightly warmed up or cold from the fridge with whipped cream or vanilla ice cream if desired.

How long do you wait for it to cool? It is best to allow this dessert to cool to make it easier to serve. The cooling time will allow the dessert to set and also avoid you burning your mouth.

If you serve this too hot it will be runny and a mess, although still tasty. Depending on the temperature of your kitchen, this may take one to two hours.

Hint: Berry crisp is best served after it has cooled a bit so it has set enough to serve easily.

Can you use other types of berries? You can definitely use different berries and fruits for this recipe. Always taste the filling before baking to make sure it’s flavorful and sweet enough.

I recommend using in season fruit or frozen fruit for this recipe. Strawberries, plums, pears, apples, cherries and other similar fruit would all be delicious.

Do you have to use a cast iron skillet? No, you can use a 9x9 baking dish (affiliate link) (either glass or metal) to make this recipe. Use a disposable metal pan if you’re bringing it to an event or a friend’s house.

If you use a different sized baking dish, it may take less time to cook in the oven since the filling and topping will be thinner.

You can also use a 12 inch cast iron skillet but it will take less time to cook since the filling will be thinner.

Berries can vary drastically in flavor depending on the crop and season, taste the filling before baking and adjust sugar and lemon juice as necessary. 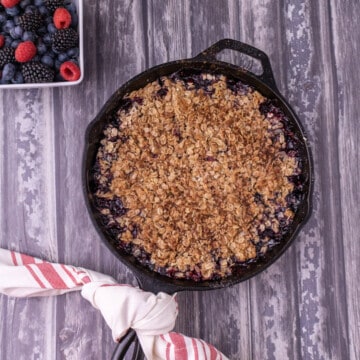 893 shares
Get the Brunch Pro Theme