How do you know if an eggplant is bad? You should be storing your eggplant in a cool dark spot much like potatoes and onions. To tell if it’s bad, check to make sure there are no soft spots in the skin and that the stem is green and not dry. If you detect any soft and mushy spots your eggplant may have gone bad. Another way to check is when you cut it open, the inside should be white and firm.

How do you store cooked stuffed eggplant? Store leftovers in the fridge in an airtight container for three to four days.

How do you reheat cooked stuffed eggplant? There are two simple ways to reheat leftovers for this dish. One way that I use most often is in the microwave because I’m typically eating it for lunch the next day. I usually cut it into two or four pieces so that it heats more evenly. If you’re at home, you can reheat at 350 F in the oven until it's warm; about 15-20 minutes. Because it reheats well, I often use this recipe for meal prep for work lunches.

How many people does this serve? This is a great comforting recipe for two people! If you're looking to serve this to four people, simply double the recipe. One of the reasons why it works so well as a meal for two is because you'll always end up with two halves from one eggplant. Perfect for date night or a special occasion.

How do you buy an eggplant? The typical type of eggplant is the globe eggplant, also known as the American eggplant. It has a green stem with a deep purple body. The skin should be smooth and it should have a pear shaped body.  Another great option is the italian eggplant, which is smaller and sweeter than the American eggplant. However, you can definitely use other types of eggplant, but cooking times and flavors may change. Other things you should look for when selecting an eggplant is medium size but long, smooth skin, and heavy for the size.  When you give the eggplant a gentle squeeze, there should be a little give, but not mushy.  Finally, the stem should be green and look alive, not brown and dry.

How do you store fresh eggplant?  It is recommended that you eat eggplant within about five days of buying it. The best way to store it in a cool and dark area to avoid browning as eggplants don’t like extreme cold.  Store eggplant in a cool dark spot and use it in the next couple of days. Keep the eggplant whole until you’re going to cook it to avoid oxidation on the flesh (browning).

What type of sausage do you use?  I prefer to use Shady Brook Farm Turkey Italian sausage. They come in both sweet and hot. I love them because they have great flavor and a thin casing. To see if they are near you (I’m not sure if they are national or not) I am not sponsored by them, just genuinely love their product. If you can’t find them, any raw italian sausage should work. You can use chicken sausage or pork but may have to drain the fat off.

Can you eat roasted eggplant skin? Yes! There is a lot of flavor in the eggplant boat after being seasoned and roasted.  I cut mine up with a knife and mix it all together. The eggplant in the boat should be just as tender as the eggplant in the mixture. I also eat the skin, but that is a preference. It is definitely safe to eat it.

Can you substitute different types of mushrooms? If you can’t find portobello mushrooms or don’t like them, you can substitute other mushrooms like white button mushrooms or shiitake mushrooms. Use what you can find, what looks good or what your preference is.

What if you don’t like mushrooms? You can easily keep out the mushrooms and add in onions, peppers or really any other vegetables. Just saute until brown so most of the moisture is gone while cooking down the eggplant flesh.

I can’t find fontina cheese, what else can I use? If you can’t find or don’t like fontina cheese, use any mild melting cheese. Fontina has a mild nutty flavor so substitutions can be swiss cheese, monterey jack or even mild (young) gouda.

How do you make stuffed eggplant parmesan?
Roasting the Eggplant
Start by preheating the oven to 375 F. Next, cut the eggplant stem off and then cut the eggplant in half lengthwise. Place the two halves in a glass pan flesh side up in a single layer and scoop out the meaty flesh with a spoon. Be sure to save the extra eggplant for the stuffing. Scoop out most of the flesh but leave ¼ inch around the edges. Brush olive oil over the exposed flesh and then season with Italian seasoning, garlic powder and kosher salt. Roast in the oven for 40-45 minutes until the eggplant is fork tender.

Cooking the Filling
While the eggplant is roasting in the oven, place a medium sized skillet on medium heat. While the skillet is heating, chop the portobello mushroom caps and eggplant flesh into bite sized pieces. Once the skillet is heated, add the remaining olive oil. Stir in mushrooms and eggplant flesh pieces. While the mushrooms and eggplant are cooking, water will be released which is normal. The moisture will evaporate and then they will start to brown. Occasionally stir the mushrooms and eggplant until they are starting to brown, about 10 minutes. Once the vegetables are beginning to take on color, remove the sausage from the casing and crumble it into the pan. Continue to stir until the sausage is browned and fully cooked.  Next add garlic paste and stir into the mixture. Add the remaining Italian seasoning and taste for salt and flavoring. It is important to make sure the stuffing is tasty at this point, continue to season until it’s delicious. Remove the pan from the heat until the eggplant is done cooking.

Assembly
Once the eggplant halves are fork tender, remove from the oven. Toss the marinara sauce and fontina cheese together with the eggplant mixture until well combined. Taste the mixture to make sure it is flavorful.  Divide the eggplant mixture into two portions and stuff each roasted eggplant half. Add freshly grated Parmigiano-Reggiano over each half of stuffed eggplant. Place the glass pan back in the oven (still at 375 F) for 10-13 minutes to melt the cheese. Remove from the oven and top with parsley and serve.

How do you scoop out eggplant? I find a simple spoon to be the best utensil to scoop out eggplant from the body. It’s small and easy to maneuver. Be sure to leave an even ¼ inch of flesh around the skin when roasting. I start at the middle of the eggplant and work my way out.

Do you need to salt the eggplant to make it less bitter? You can salt and rinse the eggplant to remove moisture, but it is a myth that it removes bitterness.  Personally, I find this to be an extra step. I tested the recipe without salting the eggplant, and it turned out great every time. This recipe calls for roasting the eggplant halves until tender and slightly caramelized and using salt as flavor.  Larger eggplants tend to be more bitter because they have more seeds. 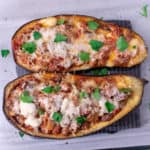 680 shares
Get the Brunch Pro Theme