Can you use bacon? You can definitely use bacon, pancetta or guanciale for this recipe. I prefer pancetta because it’s easier to find than guanciale and has a more complex flavor than most of the bacon readily available at the grocery store.

Are parmigiano reggiano and parmesan the same type of cheese? Yes and no. Parmigiano reggiano is produced in a very specific region of Italy under very strict conditions. This means that you know exactly the quality you are going to get.  Parmesan cheese can vary between brands and countries as it is less regulated. Parmesan is an imitation of parmigiano reggiano and usually cheaper. However, because this cheese plays such a prominent role in the dish, it is important to get the good stuff and splurge a little bit.The pre-shredded cheese may not melt as well and will compromise the taste and texture of the final dish.

What is the difference between parmigiano reggiano and pecorino romano? Both cheeses are hard and salty Italian cheeses that are easy to grate.A big basic difference is in the type of milk used. Pecorino is a sheep’s milk cheese which gives tangier and saltier cheese. Parmigiano is made from cow’s milk resulting in a nuttier and more mild cheese.  I love to combine the two to give a good mixture of the two flavors.

Do you need to use both types of cheese? If you prefer one over the other, by all means, just use that one. Or if you’re in a pinch you can use whatever one you have, it’ll still taste good. Using one or both of these specific two types of cheese is recommended. I would NOT deviate from the types of cheese, but they should be easy enough to find in the grocery store.

Is the rind edible on the cheeses? Yes, you can eat them but they tend to be a bit waxy. I like to save mine and store them in the freezer. I then add them to sauces and soups for an umami and cheese boost.

What kind of pasta it the best type of pasta to use? I like to use rigatoni (giant tubes) because I find that it holds the sauce really well. I prefer pasta that has an increased surface area (elbows, rotini etc) to really soak up the sauce.  Again, if you’re a pinch, use whatever pasta you have on hand. I’m not a fan of spaghetti, but a lot of people like pasta carbonara with that it.

How do you separate an egg yolk? I like to start with two separate small bowls. One bowl I use as “trash” (the egg whites and shells) and the other one is for the egg yolks. To separate the eggs I crack the egg on a flat surface (the edge of a bowl can drive egg shells into the center. Fishing out egg shells is a pain) and then over the trash bowl I transfer the yolk to one side of the shell, allowing the egg white to drip into trash bowl. I then transfer the yolk to my hand and allow the rest of the egg white to drip into the trash bowl. Once the egg yolk is separated, I add it into the designated egg yolk bowl and continue until I’ve done all 5 egg yolks. I then crack the final whole egg into this bowl and then transfer to the large mixing bowl with the cooled pancetta.

How do you get the eggs not to scramble? There are two ways to keep the eggs from scrambling.  The first way is never having the eggs over heat. The other way to avoid scrambling the eggs is by adding a little pasta water directly into the egg and mixing immediately. Then you can add the pasta directly into the egg mixture and stir immediately. It is important that you stir immediately to help temper the eggs. If you let the pasta sit on the eggs for took long they may slightly scramble.

Is pasta water really that necessary? Yes! Absolutely! Pasta water helps emulsify the sauce which gives you the creamy taste without any cream.  Traditionally, pasta carbonara doesn’t have any cream or butter, just eggs, cheese and pasta water to create the sauce. I always grab a full cup of the pasta water using a glass measuring cup before the pasta is strained. That way I don’t forget to save it. Pasta water is the secret to a creamy sauce in a lot of dishes. You don’t need a lot but just enough to thicken and bind the sauce. 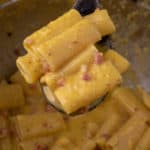 Pasta carbonara is a classic comfort dish originally from Rome, Italy. This recipe is my interpretation of the traditional dish that results in a velvety sauce without having to worry you’re going to scramble the eggs. Two types of cheese are used to give you a more balanced end result. This is an easy weeknight dinner done in about 30 minutes.
Prep Time5 mins
Cook Time30 mins
Total Time35 mins

« Three Cheese Buffalo Chicken Dip
Roasted Garlic - How to Make, Store and Use It »

302 shares
Get the Brunch Pro Theme