Published: Jul 24, 2019 · Modified: Jun 18, 2021 by Samantha · This post may contain affiliate links (I may earn a small commission if you shop through my link, at no additional cost to you). 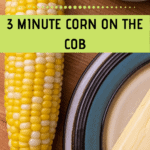 How many pieces can you do at once? I typically only do one piece of corn at a time for three minutes on high in the microwave. If you want to do more, make sure the pieces are not touching and add one minute to the cook time. I would not do more than three pieces at a time due to space concerns.

How do you get the husk off? To get the husk off you cut the stem of the corn on the cob off with a sharp knife. Then using a towel to hold the husk and push the corn cob out of the husk. It should remove easily and with very little if any silk.

What kind of knife do you use? It is best to use a very sharp chef’s knife or a serrated knife. If you are having a hard time, your knife is probably not sharp enough. The knife should go fairly easily through the cob with pressure.

What do you put on corn on the cob? Really fresh corn on the cob shouldn’t need anything added. However, butter, salt and pepper is a classic. You can also cut the kernels off and make a corn salad like this beef taco pasta salad or this Mexican street corn salad.

Why do you use the microwave? The microwave heats the corn on the cob and creates steam inside the husk. This cooks the corn perfectly without having to wait for a boiling pot of water. This method also makes it very easy to remove the husk and all the silk that comes with it. Simply microwave, cut off the stem and peel back the husk.

How do you buy corn on the cob? The best place to buy corn on the cob is at the farmers market because it will be the freshest. When looking at corn on the cob you want to see moist/sticky tassels (the silk at the top) and avoid any pieces that have dry or black tassels. This means the corn is old. Another thing to look for is that the corn feels plump without any missing kernels inside (don’t peak, that dries it out!) with a brightly colored husk. It is okay if the husk is a little moist on the outside, this means it is very fresh. Finally, avoid any pieces of corn on the cob that have small brown holes in the husks, this could indicate bugs.

How do you store corn on the cob? Like most fresh produce, it is best to eat it as soon as you buy it. However, you can store corn on the cob in the fridge for a few days in a plastic bag. You want to keep the husk on to avoid drying out the kernels. The longer the corn is stored, the more sugar is converted to starch.

What can you do with the leftover corn cobs? You can save them in the freezer for later to make pressure cooker corn broth for corn chowder. You don't have to freeze them, but I like to store them for fall or winter when I'm missing summery flavors. 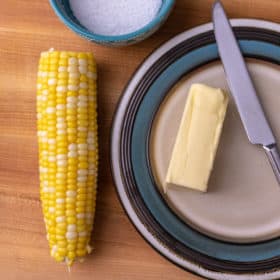 3 Minute Corn on the Cob

Three minute corn on the cob is cooked in the microwave with the husk on. This is method allows you to effortlessly cook corn on the cob and easily remove the husk. Perfect summer side dish for one or two people families.
Print Pin SaveSaved!
Cook Time: 3 minutes
Total Time: 8 minutes
Servings: 1

252 shares
Get the Brunch Pro Theme